How to clean your drains

Have you ever had your sink or shower clog itself up to the point that they no longer function? It’s never pleasant, and neither is the smell that inevitably comes with it… You could call a plumber to take care of it but let’s be honest, that’s expensive and involves planning, especially considering you could take care of it yourself for next to nothing! Batmaid will be by your side every step of the way with this step-by-step guide to keeping your drains flowing freely and odourless.

What causes your drains to clog up?

It’s always best to get to know your enemy before going on the offense, and this remains the case when it comes to your drains.

So, what exactly is causing them to plug up and start smelling? There are two mains culprits to bear in mind: The first being organic waste such as hair, food, soap and washing up liquid, and the second being limescale. When it comes to controlling organic waste, a lot of it is unavoidable, but a few simple maintenance rules can help you reduce the damage.

For example, in Lausanne and Zurich, the water hardness has been determined as moderate, which means that the amount of calcium and magnesium present in the water is minimal and your drains are at low risk of limescale deposits. On the other hand, in Yverdon-les-bains, the hardness of the water is higher, meaning the drains of residents in this area would be at higher risk of having limescale-related problems.

If you want to check the water hardness in your area, follow this link

It's worth noting that, should the issues persist even after following this guide, there could be two bigger issues at hand:

Should you find yourself in one of these two situations then it's unfortunately time to throw in the towel and call your plumber to see if they can get to the bottom of it.

How to maintain your drains on a daily basis?

Fear not, as there are a few easy steps you can take to give your drains a fighting chance to stay healthy and operational! 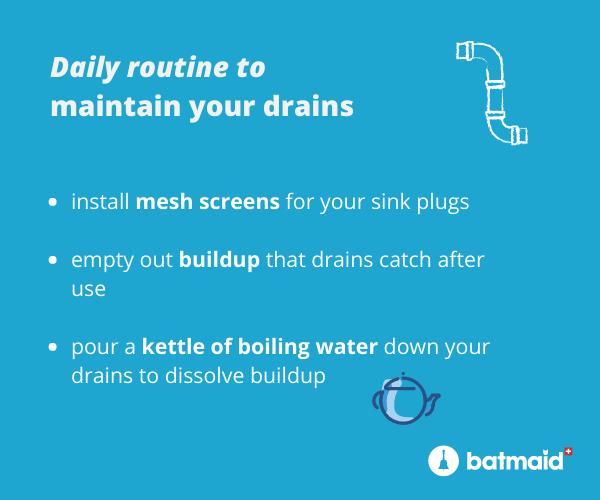 First up is a pretty standard procedure, and not having done it so far it may be the reason your pipes are having a hard time. Prevention is often better than a cure so with that in mind, invest in some mesh screens for your sink plugs. They will stop any unwanted organic waste from making its way down into your pipes and causing you trouble down the line.

In addition to implementing protective grids, make sure to properly empty out all the bits of food and hair that the drains catch after each use. We suggest conducting little checks on your pipes every now and again so that you can see whether everything is working correctly, and if not, deal with it sooner rather than later.

Now that you’ve got your prevention sorted, it’s time to take action! Once a month, pour a full kettle of boiling water down your drains to attempt to dissolve fat or soap buildups as well as any other foodstuffs that could be stuck on down there.

Top Tip: Never pour cooking oil down your drain because it solidifies when it cools down and will eventually create a clog.

How to get rid of an organic material blockage?

There are several methods to deal with an organic waste blockage. First, try the gentle method: 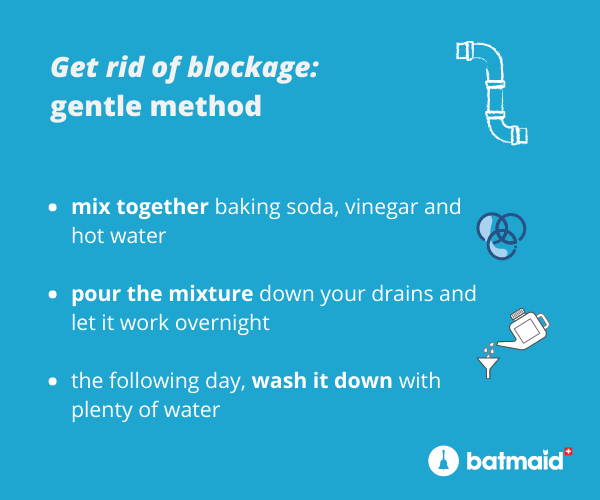 For the tough love method:

How to get rid of limescale

Now we move on to the other main offender with regard to plugged pipes: limescale. As we mentioned above, the rate at which limescale will build up in your home is dependent on where you live. That being said, don’t wait until your pipes are damaged before taking action.

One quick prevention fix to carry out regularly is to pour coffee grounds down your drain and then run hot water into it for a few minutes. Now, not all of us have coffee grounds sitting around, in which case the next best thing would be dropping baking soda down the drain and pouring a full and boiled kettle down with it. When it comes to limescale, prevention is key as once it has built up, it can be costly to deal with.

So, there you have it, our guide to drain maintenance. Hopefully next time a problem arises you’ll be able to think back to this article to try and fix it yourself before calling in the cavalry and costing yourself a fortune! If you’ve got some home remedies of your own when it comes to dealing with blockages, make sure to let us know!

Why should you opt for a cleaning agent? 3 reasons that will convince you
#Tips
If you don't like cleaning, this article is for you
#Tips